TANK DE-SILTING IS POSSIBLE
M U A Tennakoon

(For restricted circulation only) The summit on Sustainable Development Goals (SDGs) attended by a large array of Heads of Governments on 27th September 2015 declared the acceptance of 17 target goals to end poverty by the year 2030. Among these targets are combating climate change and its impact on the planet earth as the Goal number 13 and the protection, restoration and promotion of sustainable use of terrestrial ecosystems, sustainable management of vegetation, combating desertification and halting and reversing land degradation and halting biodiversity losses as the Goal No. 15. These needs are being felt by both big and small countries and in any country they are being felt in varying degree over time and space.

The focus here is on the ongoing climate change largely due to the man’s reckless interference with nature that is accentuating negative impacts of climate change and the protection of terrestrial ecosystem arresting all those damages to it spelt out in the SDG goal No. 15 . This focus is only in respect of the Dry Zone of Sri Lanka.

The cascade associated water harvested, stored, protected and guided to the places that it is to be used for command area irrigation or for the use of all living beings including the humans is the focal point of study in this article. The distribution of cascades are largely determined by terrain of land and to some extent by soil and geological conditions while availability of water in cascade-based chains of tanks is determined by rainfall received, porosity of soils that rainwater traverses and the wasteful use of limitedly available water by humans.

Tank water storages have been greatly reduced during the last half century largely due to man’s accentuation of his destructive forms of interference with forest and land preparation, causing land erosion and accumulation of silt arising out of erosion, both natural and human induced. Today almost all the village tanks are heavily silted so much so at the present rates of silt accumulation in them, many small tanks may not have more than knee- deep water in them. Even the medium size tanks will face the same fate earlier than in 2050. The situation arising out of this state of affairs is that with the receipt of two or three heavy rains notably during the northeast monsoon is ubiquitous freak floods and after three or four months, severe drought condition s appear, both because the reduction of water storage capacities of tanks as a sequel to the continuous process of siltation.

In this scenario, the usual method followed to hold more water in tanks, even around the middle of the twentieth century, was raising tank embankments and their spill levels so that the upper shorelines of tanks when water is at spill level or a little higher, moved further upstream. This has now come to a halt because the downward expansion of fields fed under an upstream tank has expanded further downstream, almost on to the tank water shoreline of the immediately followed tank downstream. Thus, the age old practice of raising spill or tank bund levels does not work today. Frequent water disputes of the field owners under the immediate upstream tank and those living under the immediate downstream tank are not uncommon.

Towards the end of the twentieth century and more so during the first decade of the twenty first century, de-siltation of tanks was under frequent reference in bureaucratic circles. Those talks lead to some wrong attempts of de-siltation which all failed.   With the modern heavy equipment available, digging silt in a tank is not a difficult task and the cost involved in doing so is not excessive. But the most cumbersome task is loading silt to trucks, taking them to some far-away places to dump that soil. It is time consuming as well and remained time consuming and prohibitively costly as well. So, the system ended a failure and what more, the silt transported and dumped somewhere was easily erodible and taken elsewhere in solution and suspension in running water choking streams and channels courses elsewhere creating new siltation problems.

This problem has been studied for quite some time (Tennakoon 2002 and 2012) and came out with easy, less time consuming and a low cost method of de-silting tank beds (without damaging the hard pan of tank) and pushing upstream-wards with the use of bull-dozers and heaping the dug-out and pushed soil closer to the places in the upper tank shoreline and heaping them as mini islands, but avoiding the main water paths coming into the tank (Fig 1)   Fig. 1 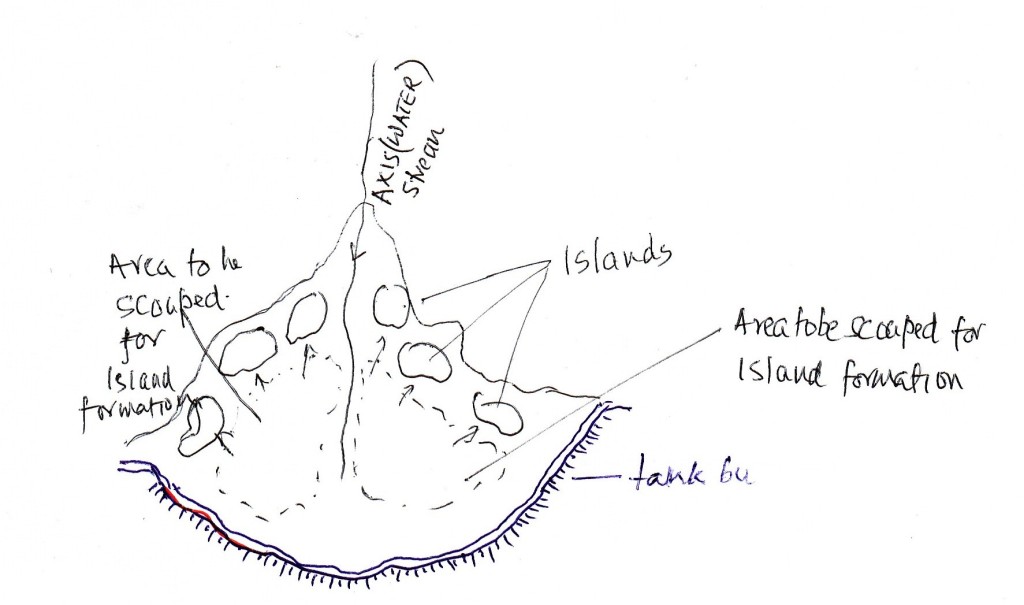 The soil can be pushed up and e compacted under the pressure of the pushing bull-dozers. The islands could have larger circumferences at the surface water levels than at summit level and in height they could be as high as 5 meters. As could be seen in Fig. 2 . The volume of earth (silt) accumulated pushed and compacted as an island is equal to the volume of earth dug-out and that volume is the additional volume of water containable inside the tank. Two experiments carried out in two tanks (one in Maha Galkadawala in Giribawa, DS, Kurunegala District and the other carried out in a village tank also called Galkadawala in the Rambewa DS in Anuradhapura district in 2003 still stand compacted and distinctly high above tank water levels in 2014) proved beyond any reasonable doubt that the system works well after 11 years and will remain effective for at least another 11 years. A 22- year good survival of these islands may deteriorate beyond over a long time to come calling for another round of maintenance. Nothing will last forever without maintenance. The technical details of this performance are displayed below. (Fig. 2) Fig. 2

Depending on the extent of tank bed and the depth to which silt is to be dug out, we cat plan the number of islands to be constructed. These islands also can be turfed and a few saplings can be planted on side slope o an island and on the top surface as well, to minimize erosion, adding a scenic beauty and encouraging biodiversity enrichment in and around the island, while providing space for more fish in the deepened tank bed.