Based on a Board decision taken on 17th March, 2016, the Chairman and Board Members – Mr Henry de Mel, Ms Kumari Balasuriya and Ms Shafinaz Hassendeen accompanied by the Executive Director, Dr M U A Tennakoon visited Alisthana. 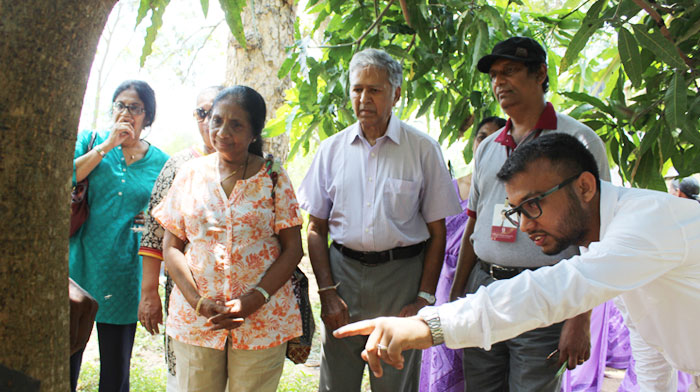 Secretary, FO, gave a moving welcome speech encapsulating the benefits received from the Tank-based Biodiversity Improvement and Protection Project (2014-2016) funded by GEF/UNDP. Two other members of SAPSRI organizations in Alisthana too spoke stating the commencement of the SAPSRI organizations under the direction of Late Dr (Mrs) Padma Ratnayake, the former Executive Director.

Group visited the Alisthana tank, its Kattakaduwa and spent some time understanding the efforts made by the villagers in tree planting, kattakaduwa renovation, introduction of fish fingerlings to the tank.

Thereafter, they visited a few home gardens developed by the villagers with the support and guidance of the Project Manager and the Field Coordinators.

The Board members had one-to-one discussions with the home-gardners and were extremely satisfied about their change for better over the past 18 months.

On conclusion of the field visit, the visitors were invited for a traditional lunch which was enjoyed by everyone who partook that food.