M U A Tennakoon Ph.D., DSc
It was the British irrigation folly of constructing vertically falling tank spills in the dry zone which is still being continued In Sri Lanka. The only concern of the British irrigation engineers was the rapid expelling of water from a tank the excess flood water coming into it during the northeast monsoon rainy period. Admittedly, the over impounded water in a tank has to be released quickly to reduce the gravitational stress of water on a tank bund. Nevertheless, the tank spills could have been better designed to save both the tank bund and the fishes in a tank which is a much needed protein souse of the millions of people. The irony is that the same European stock of people be in Europe or in America has designed dams across their streams to serve both the purposes – expelling heavy loads of water in them and paving the way for upstream and downstream movement of the fishes, while we have not dared to change the system of spill construction to serve both purposes in the tanks.

The construction of Tekkams and weirs in streams and spills of the water courses and inland tanks need re-adjustments to facilitate the free movement of fishes so that the fish populations increase in our tanks. Take the case of Malwatu Oya, the main river basin in the north central dry zone (Fig. 1.) 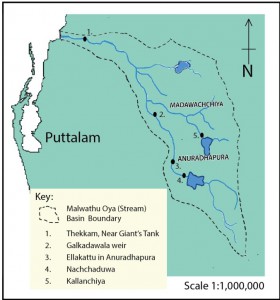 At least at five points of that stream, one at its lower reach (Tekkam near Giant’s Tank), two in its middle range (Galkandawale and Ellakattu near Anurhadhapura), and another two at its upper reaches ( Kallanchiya and Nachchaduwa) are impossible barriers for the upstream movement of the fishes. There are many indigenous fish varieties in about 1450 village tanks in 179 ellangawas drawing into this stream which requires a downstream movement of some fishes for breading in brackish water in lagoons and with frys and fingerlings remaining for some time in stream water before returning to upstream tanks to spend the rest of their lives.

The fishes downstream movement is easy. They simply slide or fall down in vertically dropping water in spills. But the spill falls are so high that those who slide down will never be able to return to the tanks. (Fig. 2)

There are many varieties of fish now extinct in upstream tanks. Perhaps many more are endangered. Only a few carnivorous fishes sedentary in tanks remain to be seen. These include snake heads (Lula) and thilapea. 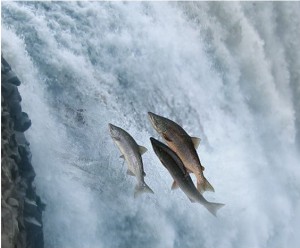 The food chains of some fishes such as snake heads is also disturbed because some varieties of fish have gone down with spilling water never to return to the tanks with their frys and fingerlings. Hence, to maintain the fish food chain balance with increased density of fish enabling an adequate fish protein supply to the humans either the structures of spills and weirs have to be changed so that the downstream falls be made gentle enabling the fishes to move up and down in their migratory pattern of existence or constructing fish ladders as in ‘Japan’s streams or if the restructuring of spills and weirs would be cost prohibitive as in the case of the Tekkama in the lower Malwatu Oya stream referred to earlier, the alternative is to construct fish ladders without damages to archeologically significant dams.

One experiment that these breeding centres may explore is the possibility of finding a low cost system of fish spawning units in the tanks themselves. This bit of experiment may be tried with necessary research. It may hold good in respect of some varieties of fish but not in respect of those trans migratory fishes between fresh water reservoirs and lagoons because of the different water environments required at different stages of their lives. So let there be free upstream and downstream movement of fishes with existing barriers removed or changed as suggested above.