With the support of the Global Environment Fund (GEF) and logistic support of the United Nation Development Fund (UNDP-Sri Lanka), South Asia Partnership Sri Lanka (SAPSRI) selected Alisthana, a tank village in the Thirappane Divisional Secretariat in the Anuradhapura District and commenced the implementation of the above pilot project in June 2014. 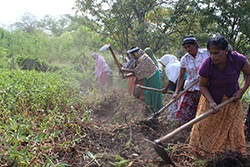 A cascade-based tank village has 37 components already identified (Tennakoon, 2012) of which six components in the Alisthana tank village have been identified for the implementation of this project namely the improvement of : the tree girdle (gasgommana); a part of the silt trap (perahana); the boggy meadow (kattakaduwa) at the foot of the outer toe of the tank bund, tank water spread area for inland fisheries development; a selected number of fields owned by the villagers for organic cultivation of a few varieties of paddy and home gardens to increase the villagers’ economic returns with an effective vegetation cover as well as ameliorating the micro climate around the dwellings as well. 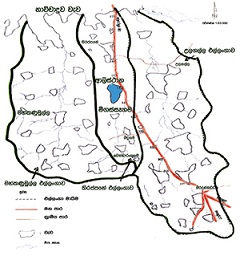 First, the project intends to show-case the above tank village based development so that it will be an example to follow in other villages. As Alisthana is by the A-9 road adjacent to the Thirappane hamlet, it can be easily reached from any part of the northern and north central dry zone, to witness the ongoing development of the pilot project and be convinced that it can be replicated. Second, Alisthana tank has a relatively stable rain water supply throughout, though rather exceptionally, it went completely dry in the months of August and September 2014. It did not run dry during the past 25 years and there were 33 successive seasons of irrigated paddy cultivation downstream of the tank. Third, the village is not too large, not too small, as there are only 93 households. Fourth, it has one of the best Farmer Organizations (FO) in the Thirappane Divisional Secretariat Division with a high degree of farmer participation in community and agricultural work as evidenced in our initial fact-finding missions. Fifth, there is a reasonable group of persons with secondary education and the rest with some primary education deemed necessary to understand the intricacies of development in a pilot project of this nature. Sixth, most of the village level officers of many departments appeared to be cooperative at the grassroots level development. Seventh, SAPSRI has one of its most successful Small and Medium Enterprise Development (SMED) credit scheme in operation in Alisthana under the aegis of SAPRI. Finally, the advantageous location of the village by the side of A-9 road seemed to have good wayside marketing opportunities for what the villagers produce.

Gasgommana Development Once the Department of Agrarian Services provides the tank contour map SAPSRI with the support of free labour of the villagers and hired labourers 8,000 trees will be planted mostly in the Gasgommana which when grow up will be an effective wind shield to the tank. Drying dry winds during the dry season (May to September) dries the tank water through high evaporation. In the months of June, July, August and September, 6 inches of tank water per month is lost due to surface evaporation which means a loss of 24 inches out of the average annual rain fall of 75 inches received in the region. That is nearly a third of the average annual rain fall! For the reason alone, there is a crying need to revive a gasgommana in a village tank. When a gasgommana is resuscitated or established a sustainable biodiversity ( with plant and bird varieties) will come in to force. The plan is to plant 8,000 native water loving trees – Kumbuk, Mee, Namboda etc. in the gasgommana. In the long run in addition to the mitigation of tank water evaporation and enhancement of bio-diversity, the gasgommana will be a source of timber and firewood for the villagers. Perahana A part of a perahana (silt-trap) that is 3 ft. x 600 ft. will be established with selected reed varieties at the upper shoreline of the tank, when full, to arrest the free flow of vegetative debris– dead leaves, twigs and even decayed parts of trees –when it rains heavily. Not only these material flows will be arrested at the perehena but they will be heavens for wading birds, amphibians and other water loving creatures for resting, nesting and bring up the young ones. The tank water will be cleaner than what it is today due to the filtering effect of the silt-trap. No exotic reads but only the native reeds will be planted in reviving the perahana. 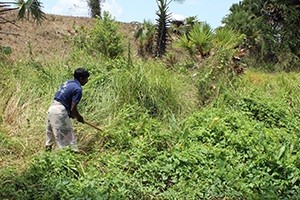 The significance of kattakaduwa is not well understood. It is surprising that even the villagers do not realize the importance of the Kattakaduwa, a store of murky highly alkaline water tongue (belt) right along the outer toe of the tank bund maintained in the past. This was to accumulate that alkaline water at the bottom of the tank upstream, seeping beneath the tank bund though capillary action, without letting that injurious and polluted water to flow freely to the downstream fields destroying or harming the crops. A further step taken by our irrigation forefathers is planting salt succulent plants (timbiri, mee, kumbuk, val beli, vetakeyy etc,) on the banks of the kattakaduwa to reduce alkalinity in its water. The surveyors during the early British administration (1870-1935) have acknowledged the importance of kattakaduwa and marked them clearly on the Final Village Plans (FVPP) and required them to be preserved. This was grossly violated by the late-day ‘tank developers’, so much so, that, the owners of ihala elapatha (upper most field strip of the Old Field (puranavela) have ignored this strategically valuable ‘reservation,’ opening their land holdings almost up to the outer toe of the tank bund. Alisthana has not totally escaped this onslaught. However, about 60-70% of that murky water tongue of kattakaduwa exists not in continuity but dissected into 5 pool areas. Dissection has been due to changes in irrigation outlets (sluices and main channels leading from there) and unlawful upstream expansion of paddy extents (at least in one place) up to the outer toe of the tank bund. The Project aims to maintain these 5 pools and introduce more salt succulent plants to keep alkalinity under control. This Kattakaduwa is very important to the tank environment and to the people living in association with it. A variety of medicinal plants required by the villagers come from kattakaduwa (Dharmasena, 2001). It is the home of endangered amphibians and sometimes that of the reptiles. It sustained certain species of fish which can survive in alkaline water. It is even the home of wading birds like ‘korawakka’. Thus from many perspectives, the resuscitation of kattakaduwa cannot be ignored.

Organic-paddy Cultivation Already there are a few who have successfully tried it. Even the yield per unit area of paddy cultivated with all forms of chemical applications including chemical fertilizer at a high price, is higher than that of organic-paddy yield per unit area, the latter is expanding its niche’ markets where the demand and the prices of organic paddy are steadily increasing.

Development of home garden is important in three ways. First to the villagers to keep gardens in production during the dry Yala season (May to September) so that they get (a) some income from the garden produce and (b) increase garden produced vegetables for their own consumption which itself is an effective measure of household saving. The farmer income from all forms of cereal cultivation including irrigated paddy farming and highland farming (with agro-well irrigation) is bimodal – the peak during the Maha (main cultivation season) and a little during the Yala season – March to May, which itself is highly uncertain. In between these two seasons virtually there is no any significant income from farming. To give some income to the farmers during this ‘blank’ period, four things can be done – one use available ground water during this dry season to grow vegetable and short-term cereals (meneri, gingerly and sorghum) to meet (a) and (b) above. Second, concentrate more and more, on the growing of economically important tree crops – diul (wood apple), guava, papaya, tamarind etc, which have a fairly stable market and by the virtue of the village’s location on the A-9 road such products are easily saleable on the way side. Third, it is very necessary to make valuable labour in the village productive during the rainless period (May-September) of the year, inducing them to prepare their home gardens well, and if possible to raise some crops, without idling until the drought ending rains come.

To begin with, though this looked impossible but with persuasion and practical training given to them at the Project Office, it has been possible to induce 30 families to engage in early home garden improvement by way of cleaning the home garden, laying out vegetable beds and watering them properly without waiting for the next north-east monsoon rain likely to be in October 2014. Nearly a half of the families in the village responded well and they have proved that their home gardens can be productive even during the times of harshest weather conditions during a drought. So they perceive drought in advance and adjust to it.